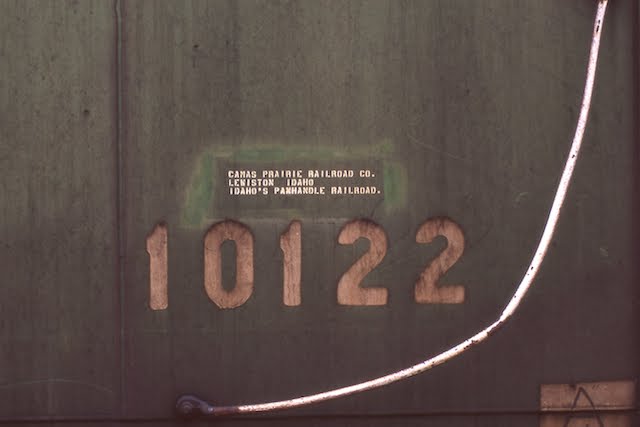 Fellow railroad modeler Dave Lehlbach and I recently acquired some aerial images of our respective modeling subjects from the Washington State DOT.  Dave has been advocating the use of aerial images in modeling research for many years because of their definitive evidence...A snapshot in time so to speak.  The aerial below is from Lewiston in September of 1966.


Previous to this, my data consisted of a birds eye post card picture from 1959, a track map from the 1940's and some hand drawn maps the late Jim Morefield, Chief engineer for the Camas Prairie Railroad, drew up in the 1980's.

Until now, I hadn't found any pictures of this area from my era or close to my era.  This photo reveals some things, and of course, creates new questions.

Following are some of the learning points that may alter how I model this portion of the railroad:

The aerial photo also gives an impression of how many vehicles were on the streets, as well as parked at the various factories, plants and businesses within the modeled area.

This aerial snapshot in time provides a lot of definitive information for my era.  For anyone trying to model a specific time, aerial photos from the modeled era are a must.

The last few weeks have been fairly eventful.  In spite of planning, planning some more and ultimately planning just a little more, I finally decided it was just time to stop with the excuses and get going!


Rather that start construction during the winter, when the weather here in Texas is temperate, I decided to start in the summer, when Texas is at its hottest (It was 107 degrees yesterday)!  Why do things easily?


Benchwork construction seems to follow Newton's law of motion.  I've been on a roll with plenty of momentum since late June.  Framework for the staging loop, PFI Mill, the East Lewiston yard and east approach to the depot are built. Below are some pictures of the progress so far...


There is still about 25% of the framing to do in the main layout room, including an interesting engineering project spanning the room's balcony overlooking the front foyer of the house.


My goal is to have the staging loop and main line in to the yard, as well as the trackage for the paper mill in and running by Thanksgiving of 2012.  Boy, putting it out there in cyberspace makes the goal much more real!  More later...I have plywood to cut!
Posted by Matt Sugerman at 5:24 AM 1 comment:

I know this guy named Steve...

Way back, and I do mean way back, like 1979-ish, when I was little kid enamored with real and model trains, I tagged along with my dad on a regional NMRA layout tour to several Chicago area model railroads.  I was 7 at the time and when we toured these many model railroads, my dad would say the same thing:  No touching.  I think I was pretty good about this (right dad?), but boy did I want to run a train badly!

My dad had taught me to run trains slowly on our under construction home layout and I would take care of any train I was allowed to run, but who would put their trust in some 7 year old kid?  Our last stop was a friend of my dad's: Steve Karas' Central of Wisconsin.  My dad said I should ask Steve if I could run a train, that he might let me.

Steve didn't even hesitate..."sure, you can run, but you have to run slowly" he said.  No problem, I had been practicing at home!  For the next hour or so, while Steve and my dad talked, I slowly ran the train around his railroad, knowing I could make the experience last a really long time!

About a decade later, I had a rekindled interest in model railroading when I was in high school and I became a regular operator at Steve's model railroad..."the CoW".  Being 16 (a young punk), I was relegated to a small terminal, at the end of the modeled portion of the railroad, near the furnace in the basement, out of the way of the rest of the operators (out of their hair so-to-speak), in a small terminal called .

It was a purgatory of sorts, but I made it my own, using the opportunity to learn more about general operations and yard switching in particular.  Assigned a chopped nose RS3 for a yard switcher, affectionately known as "the Louie", I went about my daily chores.  As time went on, more responsibility was placed in , including helping trains up the grade to Ralph and loading ore cars at the local mine (actual scooping of some substance that looked like iron ore from a coffee can and putting it in ore hoppers).

More and more things were added to the job and the sleepy, out of the way job at became an important cog in the operation.  So much so, that some of the "old heads" ...regular operators who were older than me (which was everyone)...started sniffing around "my job" at .  It wasn't too long before I was "bumped" out of the yard.

By this point, I was integrated into the group more and started working whatever road jobs were available.  About this same time, timetable/train order operations were getting popular and Steve wanted to integrate them into his model.  Steve had been going to sessions at Jack Ozanich's Atlantic Great Eastern and Bill Darnaby's (at the Midwest Railroad Modelers club) where they used train orders for train movement.

Steve talked about how much he liked this type of operation and it sounded really intriguing to me too.  I wanted to operate at these two railroads, but Steve wasn't sure he could invite me.  One night, at an op session at "the CoW", Steve said they were taking the train to Jack Ozanich's AGE in the next day and did I want to tag along.

Steve primed me on the train ride to about what a hard ass Jack Ozanich was.  How he demanded perfection and was know for yelling at operators who didn't follow the book of rules to the letter!  I listened, knowing Steve's pension for exaggeration and prepared myself for the "serious" operating session at the AGE.

Steve recounted a previous session he had attended in which an operator had failed to read the timetable properly and caused a head on collision in which he and the other operator were "killed"!  He told me how he looked for feet in the aisle, when making decisions about advancing against a train listed in the timetable.

While it wasn't nearly as stressful and serious as Steve made it out, running at the AGE had a profound affect on my interest in railroad modeling and prototype railroad operations.  I was absolutely bitten by the train order bug and was quite interested in Jack's approach to railroad modeling.  And I was definitely on board with utilizing train order operations on "the Cow" and every other model railroad for that matter!

I really liked train dispatching with timetables and train orders and strived to learn not only the operating rules, but how to integrate the rules with dispatching trains.  I searched for old rulebooks, train dispatcher manuals and the train order operations bible, Rights of Trains.

I moved away from the area, went to college in , and went to work as train dispatcher for Montana Rail Link.  I hadn't seen much of Steve in the last 15 years, having moved a couple of times with the various railroads I have worked for.  Last year, in October, I was attending the Prototype modelers meet in the area and Steve was there.  We talked about the progress on his railroad and life after retirement.

He asked me the same, and was shaking his head as I told him the various highpoints of the past few years.  "I remember when you were this annoying punk kid..." he said.  "Now you work for the railroad, are married and you rescue dogs (my wife and I have been adopted by three greyhounds!)...a responsible adult."

Steve was very good to me when I was a young punk kid, putting up with me acting, well, like a young punk kid!  Looking back at many of the landmark moments for me in this hobby, when I was young, many were influenced by Steve Karas.

At the RPM, Steve also mentioned he had some life threatening health issues and was battling some form of cancer.  He suggested that he may not be around that many more years, but was going to continue buying Sunshine freight car kits just the same!

Steve lost his battle with cancer on July 13th, at age 70, passing shortly after many of his friends had dropped by to see him on the regular Friday operating night.

I know this guy named Steve...Rest in peace old friend. 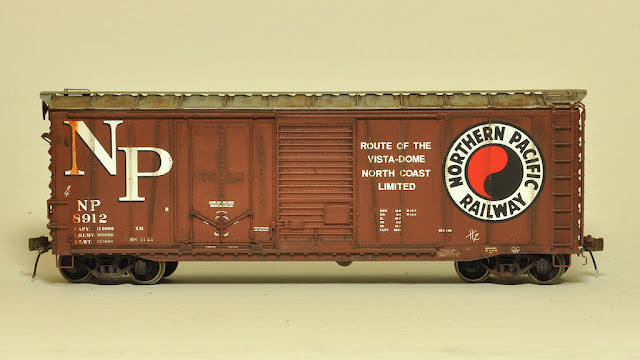 During the past several years, Ted Cullotta wrote several articles for Railroad Model Craftsman titled Essential Freight Cars, about the needed freight cars for the typical post-war, transition era modeler.  So I have borrowed Ted's byline to start a new series of posts on the freight cars needed to model the Camas Prairie Railroad in 1967.

Prototype
In the mid-1950's, Northern Pacific Railway found they needed more specialized boxcars than the ubiquitous 40 foot, 6 foot wide door boxcars that had been the mainstay of the car fleet since the mid 1930's.

In 1958, NP began building boxcars that could be used to load grain but also be loaded by forklift with shipments such as lumber or paper.  The result was a 40 foot combination door car, that included a 6 foot sliding door and a 8 foot plug door.  With the plug door closed, the car could be easily coopered with a grain door for grain loading.  With the plug door open, the 14 foot opening would make loading lumber by forklift possible.


Hi all, been away way too long since I wrote about anything Camas Prairie!


I finally have a track plan for viewers to look at.  Its a pencil drawing and more of a draft than a final plan, but it gives a pretty good framework for the footprint of the layout.


Some track work may change as the track is laid, but this is the format the railroad will follow.  You'll notice it has an unusual footprint, as it occupies two rooms in the upstairs of my Texas house.  The transition from the main room into an adjacent bedroom, goes through a door way.


Each grid square represents 6 square inches.  The prototype of the portion modeled is approximately 4 miles and is represented by approximately 1.5 scale miles.


Not shown in this plan, is the staging loop that will be under the Potlatch mill.  This staging will represent points east: Spokane, Orofino, Kamiah, and Grangeville.


The drawing of the Potlatch mill is also somewhat flexible.  Since making this drawing, I have made some revisions in sketch form to  the mill complex track work and building layout.  A better drawing of the mill will appear in a following post.